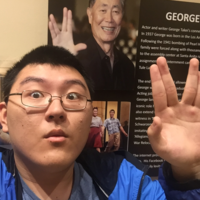 “Eric Tabuchi is the weird boy in APN who only takes on the equally weird jobs. These include (but are not limited to) being the classroom meme, catering rock-hard California Rolls that people like for some reason, and telling stories that distract his classmates from their crippling depression. Despite his special talents, he has produced and edited stories, been an anchor, and writes the best bites according to Mr. Nunez. He tends to be the Technical Director in studio and works on APN’s comedy show, Lights Out. If you see him, that's cool”. -Eric Tabuchi