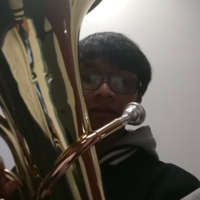 Trevor Htoon (H-Toon) is a current member of Apache News. He is also an aspiring linguist and a bass guitarist of a rock band known as the Eutectics. Every week, he often produces and edits a random story along with help from his partner in crime, Nick Oo. Trevor specializes in video editing and has worked with Adobe Premiere Pro since he was about 10 years old. He hopes to become a cinematographer and a linguist for his career. Apparently, Trevor only person in APN who is also a part of the school's marching band and whenever there is a band story, he gets called to do it. (along with Nick Oo) ;)

A Memorial to Stephen Hawking