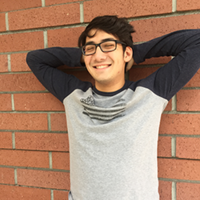 Jason Soldo is a senior at Arcadia High School and a first-year member of Apache News. Before joining APN, Jason was in Advanced Theatre. His video production experiences prior to APN include Beginning and Intermediate TV. He spends most of his time creating graphics for live shows, as well as anchoring multiple shows. Although he is not sure of what the future holds, Jason wants go into voice acting, or any job where he can take advantage of his voice.